It's new release day at Sandra Caldwell's Etsy shop and this is one of the sweet images she has coming out, called Cute Couple, Here they are colored up with Copics. 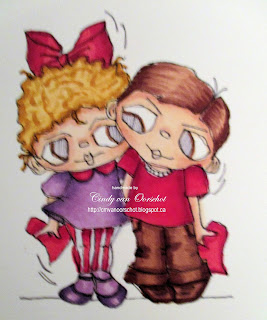 I have made them into a Valentine's card in a box project. 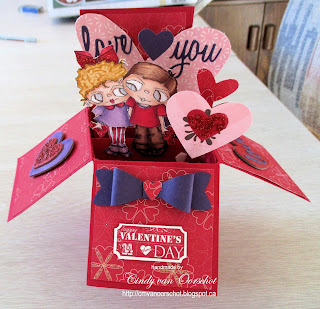 I have used some die cut hearts, some punched hearts, some chipboard hearts, and diecut words too.
The paper used on this box was from an old paper stack from Stampin up called Sending Love Specialty Designer Paper, as it has glitter on it, and was a special valentines pack. The purple hearts are chipboard painted with acrylic paints, the large heart in the back is also chipboard, just covered in paper, the words are from a Tim Holtz set called Celebrate. the sentiment is from Stampin up, That's the ticket, and punched out with matching punch. The bow was made using bow builder punch. and the image it self is so darn cute, and was colored with copics. 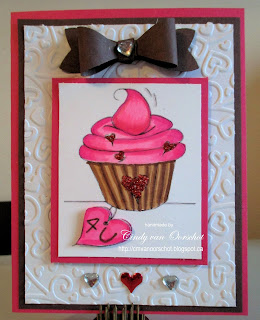 Ok I have another share today, another new release from Sandra, this one is called Chocolate Cupcake for you. It is colored with copics, I stamped another one and cut out the 4 you hearts, then colored it as well and layered it on top, so the tag has some dimension. Afterwards  I used Cherry Cobbler dazzling details on the hearts, made a bow with the bow builder stamp, and added some rhinestones to the card.
Thanks for looking
Cindy

Posted by Cindy van Oorschot at 6:00 AM 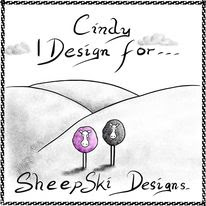